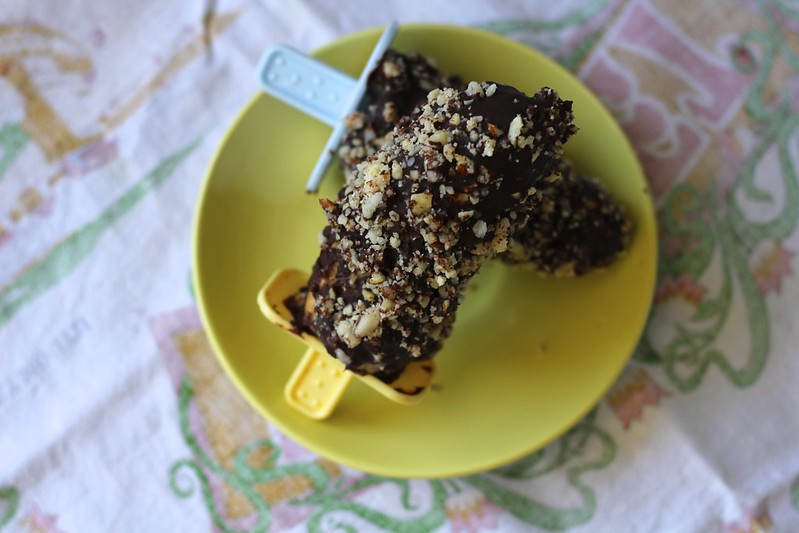 Arrested Development has been one of my favourite shows for years. Sadly it was cruelly cancelled by Fox during its third season, much to the disappointment of all its fans. It grew in popularity after its cancellation and finally, seven years later, they released a fourth season via Netflix (which premiered 26 May 2013), woohoo! I wanted to celebrate this momentous occasion by making some homemade Bluth bananas, a treat which is sold on the show at the family’s Banana Stand. 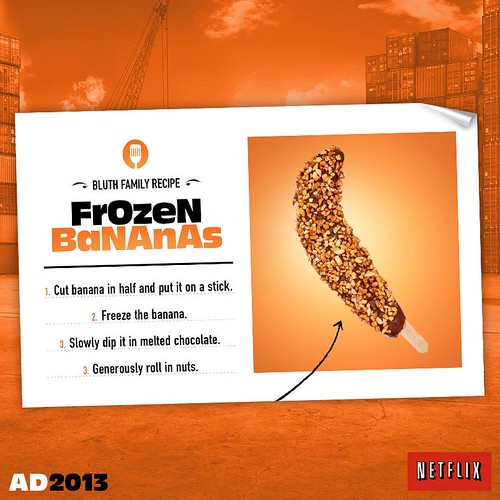 As you can see its a pretty easy recipe (my favourite kind!) and is a fun treat to stash away in the freezer. It would be great to make with kids! 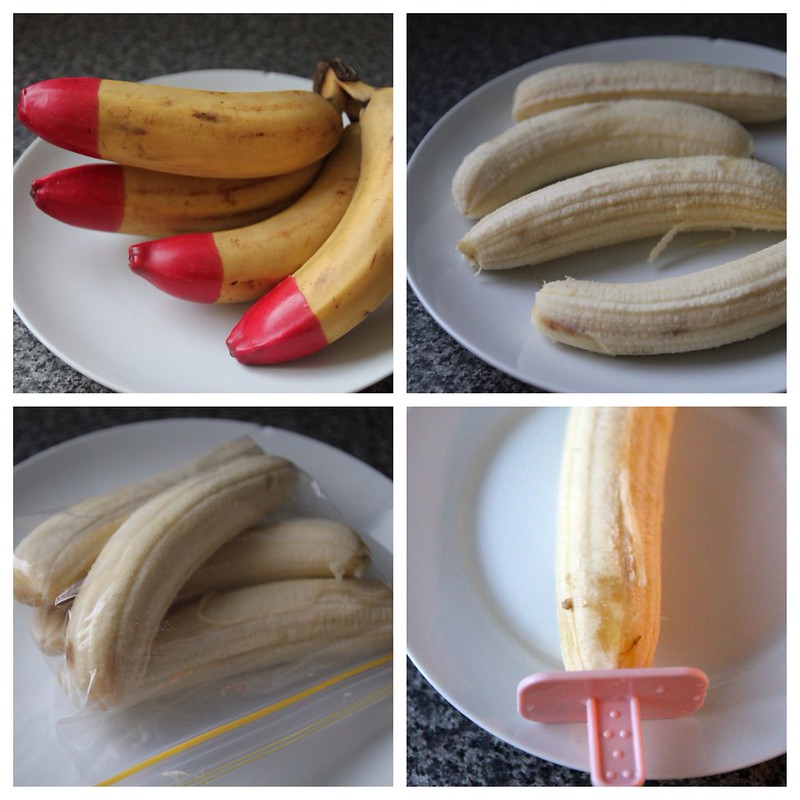 Peel four ripe bananas and seal in a plastic bag to freeze for at least one hour (or overnight if you have the time). Remove the bananas from the fridge and insert a popsicle stick or similar (I used the plastic sticks from my iceblock moulds). 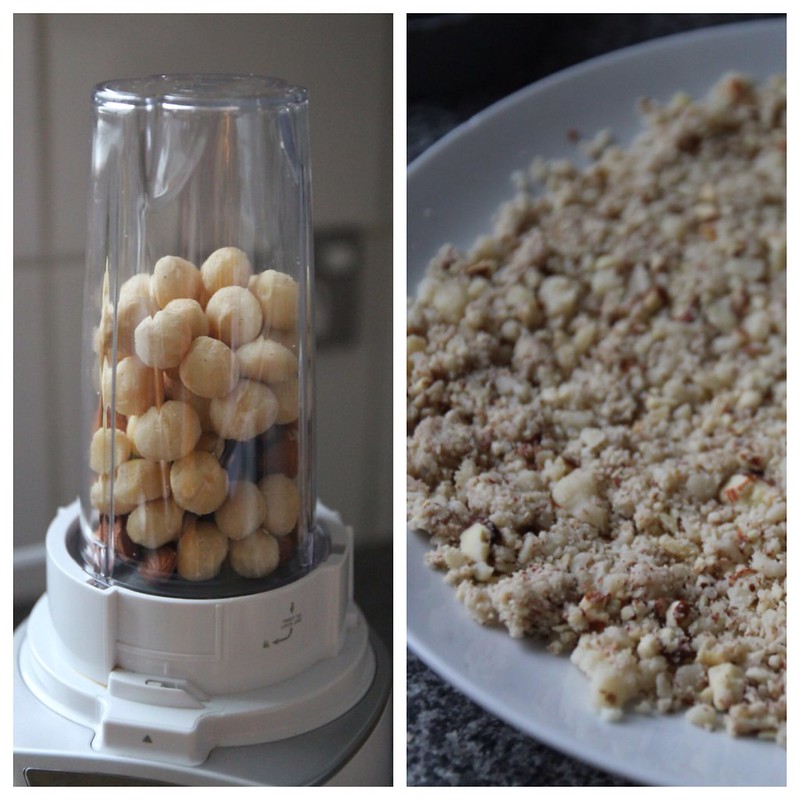 If you are crushing your own nuts, this is a good step to get out of the way while the bananas are freezing. I used a handful of almonds and macadamias (but you can use whatever you like: walnuts, cashews, peanuts… anything really). Spread out your crushed nuts on a flat plate to roll your bananas in. 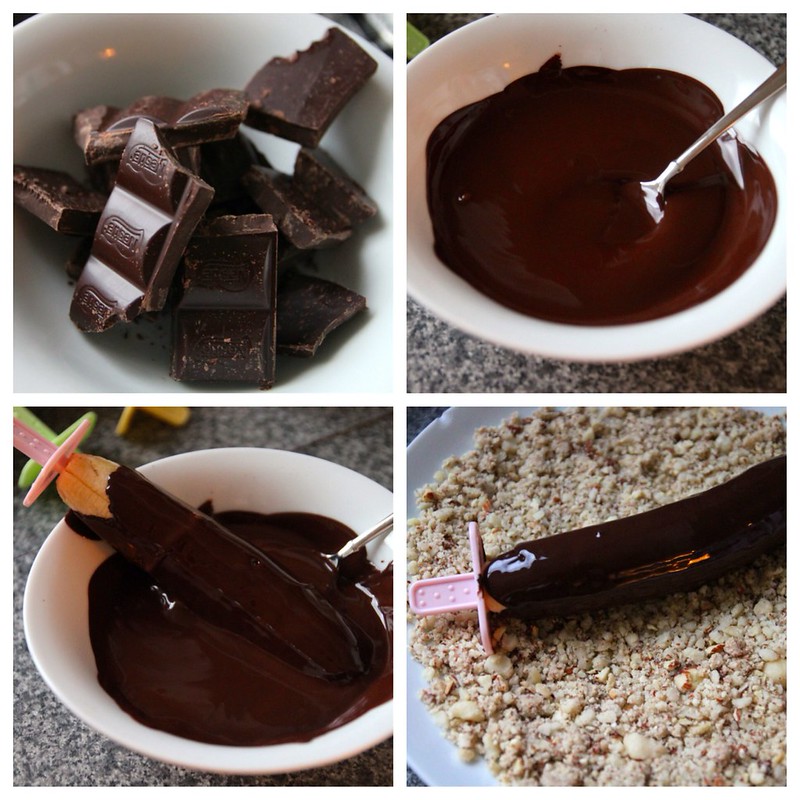 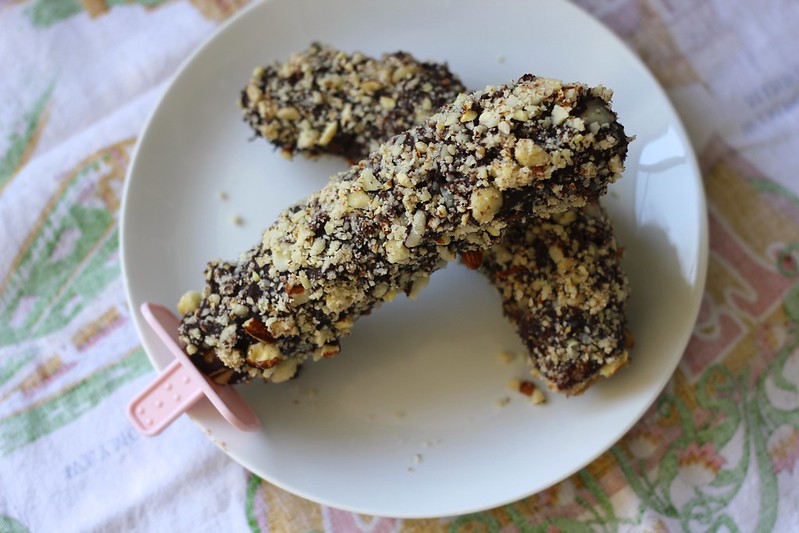 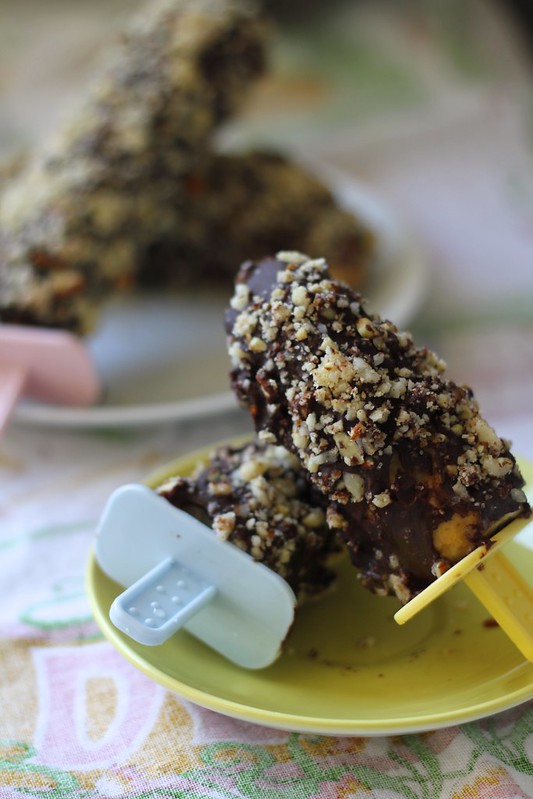 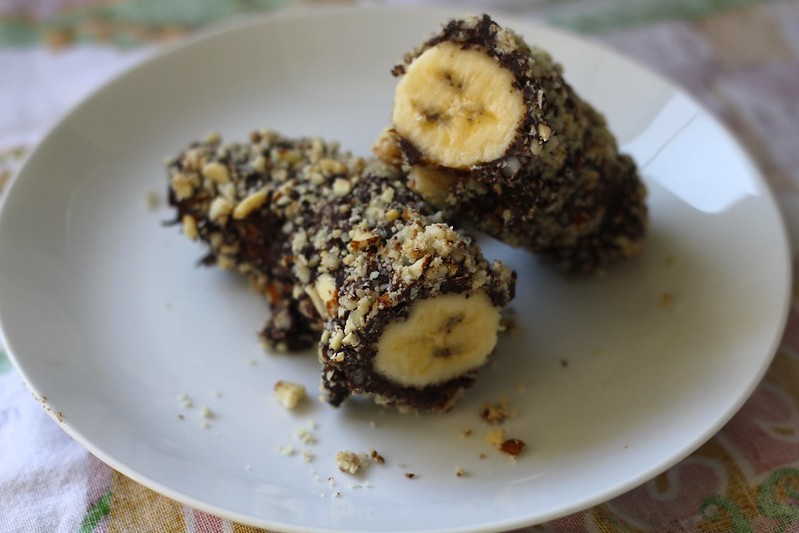 Makes: 4 large frozen bananas, or 2 large and 4 small (depending on how you want them!)
Time to prepare: min. 1 hour to freeze, 10-15 mins to assemble

Equipment needed: a food processor (or you can seal your nuts in a ziplock bag and bash them with a rolling pin!), a bowl to melt chocolate in, 4 popsicle sticks or similar, 1 plate, ziplock bags 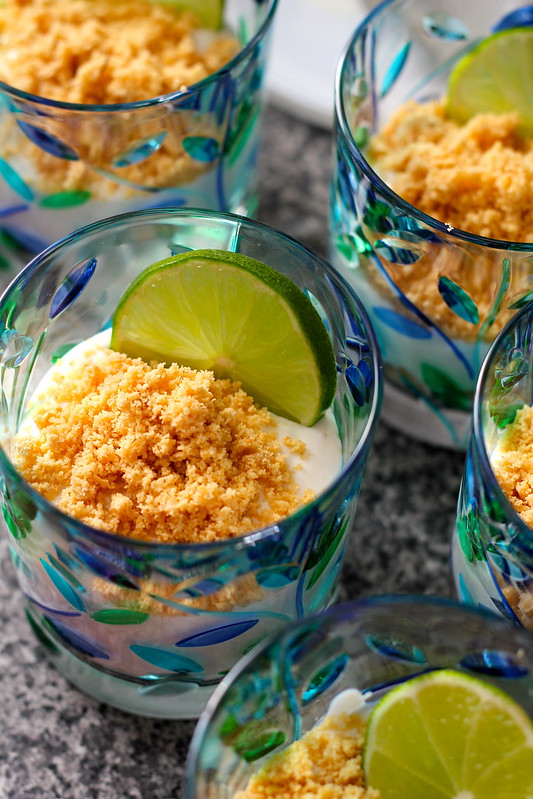 On my latest adventures in ‘no gluten or dairy’ land (see here to read more), I came up with this dessert gem. I’d often seen Tofutti ‘cream cheese’ in the cold section in supermarkets, but dismissed it as being one of those tofu replacements that tasted, well, kind of awful. Not to mention the price – almost double what I would normally pay for cream cheese.

Well, I decided to give it a try, and was pleasantly surprised with the results. The texture is pretty much exactly the same as cream cheese and it tastes very similar, without a soy or tofu-like aftertaste. I was very impressed and tried it out with my vegan mushroom pâté and it worked out really well. I am looking forward to trying it out in new recipes – definitely more cheesecake flavours. Maybe even some frozen cheesecake pops? Cream cheese frosting?! The possibilities are endless! 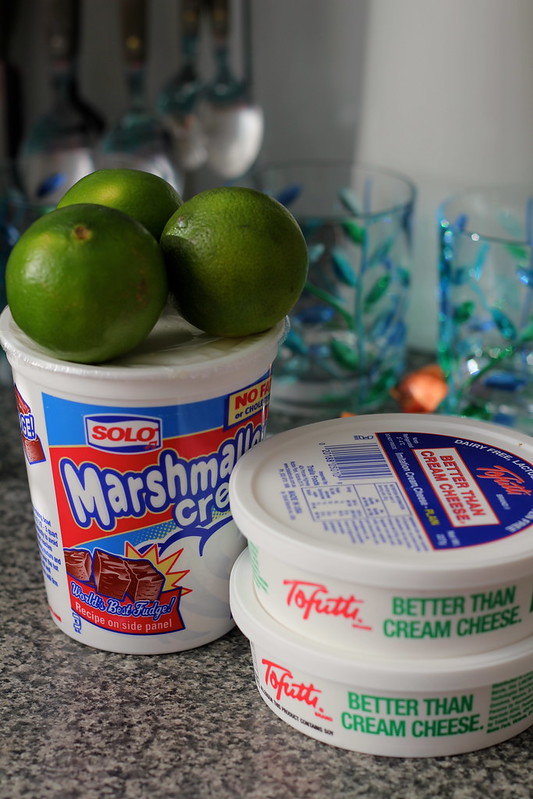 I had a jar of American marshmallow cream sitting in my cupboard waiting to be experimented with and wondered how it would go when combined with Tofutti and lime juice and it was a surprisingly delicious and easy to make filling.

For the cheesecake crust, I wanted to go with something gluten free without compromising on flavour. Why avoid the gluten? Well I’ve been having a few digestive issues lately and gluten doesn’t seem to help, plus experimenting with gluten free foods is always a fun challenge! I wanted something biscuit-y tasting but without the gluten. Enter roasted almond meal mixed with coconut oil – it tasted soo biscuit base-like, your guests really will never be able to tell the difference 😉 I also added some vanilla bean paste to give it some extra flavour, yum! I was really surprised how similar this tasted to regular cheesecake bases.

In future, I’ve love to experiment with making this the more traditional cheesecake route, pressing the crust into a pie pan and filling like a tart, but for small dinner parties, the deconstructed look in pretty glasses works well and is incredibly easy to put together. I was really amazed how much these tasted like ‘real’ cheesecakes as well, I could barely taste the difference! So rejoice, gluten and dairy free foodies, there is still cheesecake-y hope for the future! 😉 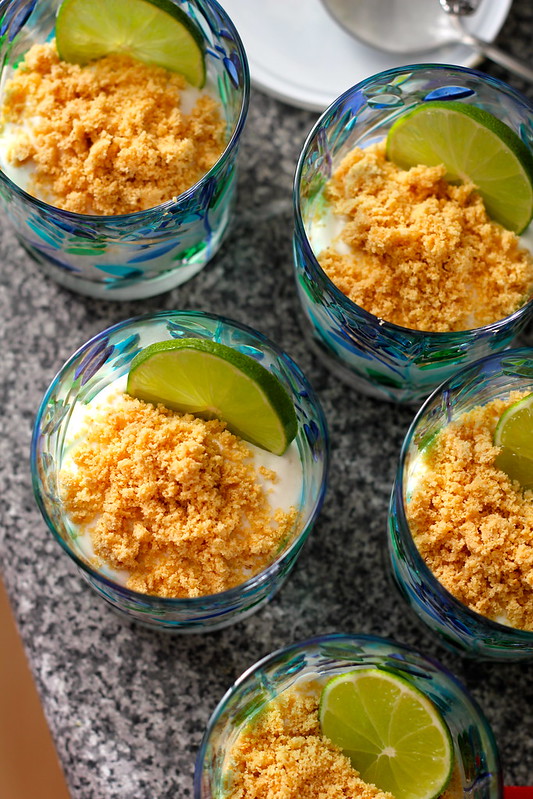 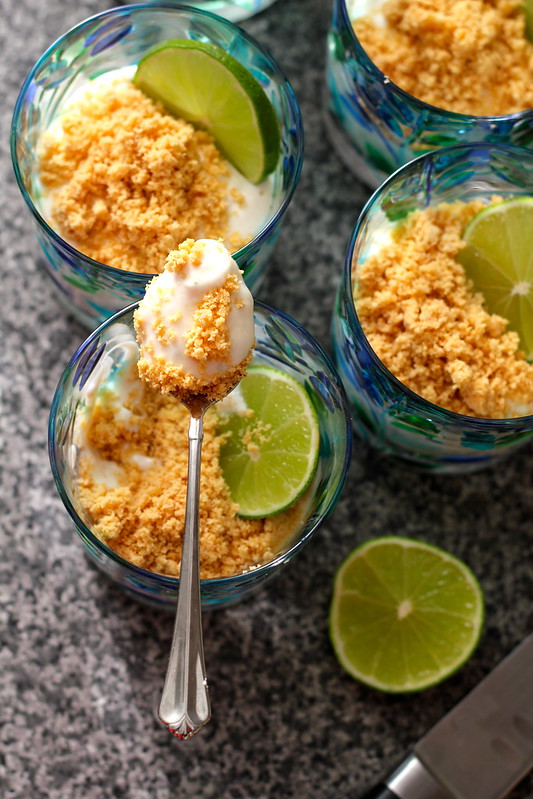 Serves: 5 (I half-filled 5 drinking glasses)
Time to prepare: About 10 minutes to prep and at least 2 hours to chill in the fridge

*Note
If you don’t have marshmallow creme, don’t despair! It’s quite easy to make (from what I’ve seen online anyway – I haven’t tried it yet) – it seems like it’s basically a meringue made with egg white, sugar and corn syrup. I reckon this would probably work well without the corn syrup as well. Here’s a great recipe for a handy guide.

If you’re not averse to using gluten/dairy in your cooking, then I’m sure that using regular cream cheese and/or replacing the almond meal with crushed bikkies would also work a treat, but give this is a try anyway as I think you may be pleasantly surprised! Additionally, Tofutti cream cheese has lower fat content than regular cream cheese, making this dessert a good alternative for those trying to cut a few calories. 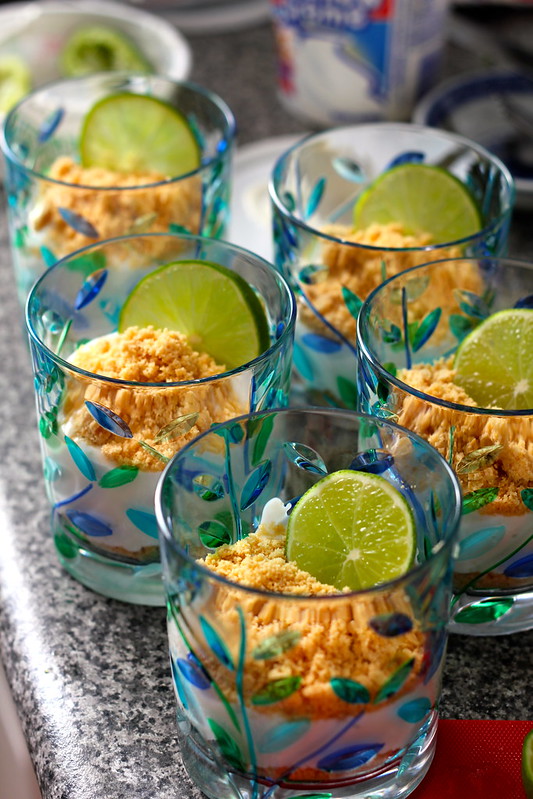 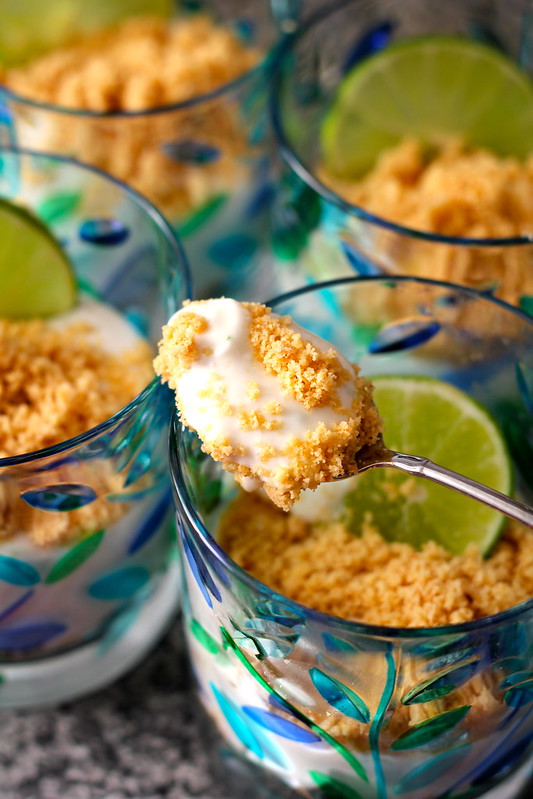 Hope you all had a super relaxing weekend full of lovely sleep and incredibly delicious food and are looking forward to the week ahead, I know I am ! 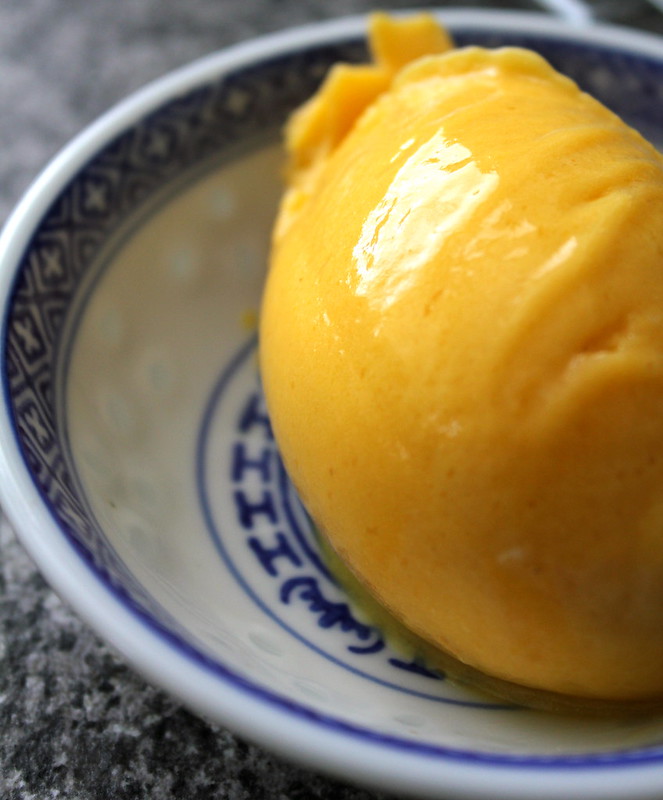 Here’s a recipe to get you ready for summer… A ridiculously easy mango sorbet you can whip up in no time – and no ice cream maker needed! You will however, require a food processor – or a high quality blender may do the trick too. I finally caved in and purchased a food processor and I looove it. Homemade cookie dough dip? Yes please. Pesto, hommos, capsicum dips? I’m there! I can’t imagine my kitchen life without it now! If you have any great food processor recipes, please share as I’d love to have another excuse to whip mine out 🙂 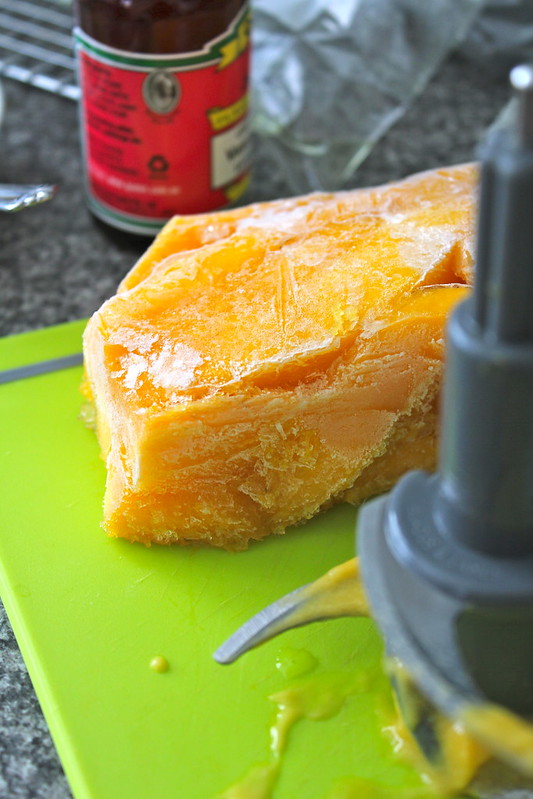 This recipe is very easy to prepare and make, and only takes a few minutes to blend – what’s not to love?

Start out by (not pictured) freezing fresh mango flesh in ziplock bags overnight. 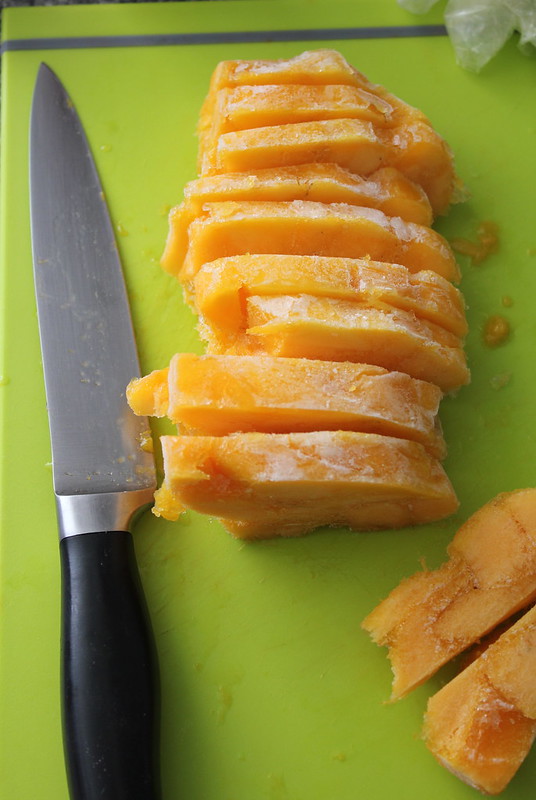 Remove mango flesh from ziplock bag and slice into chunks. 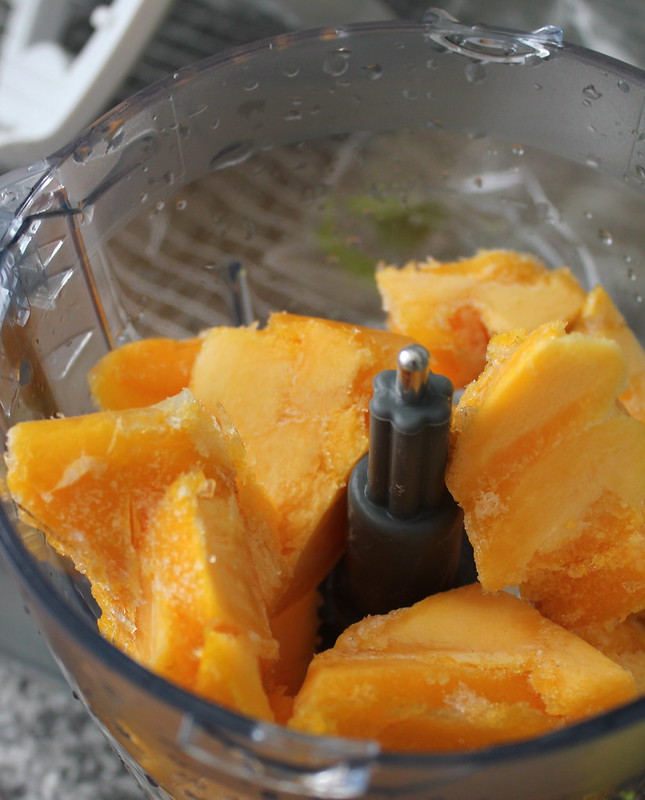 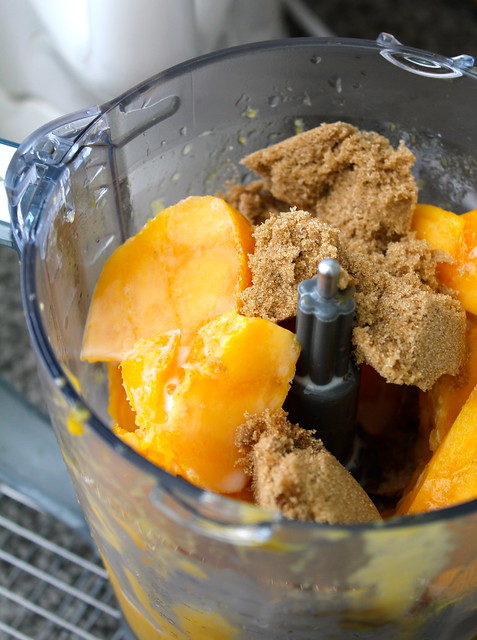 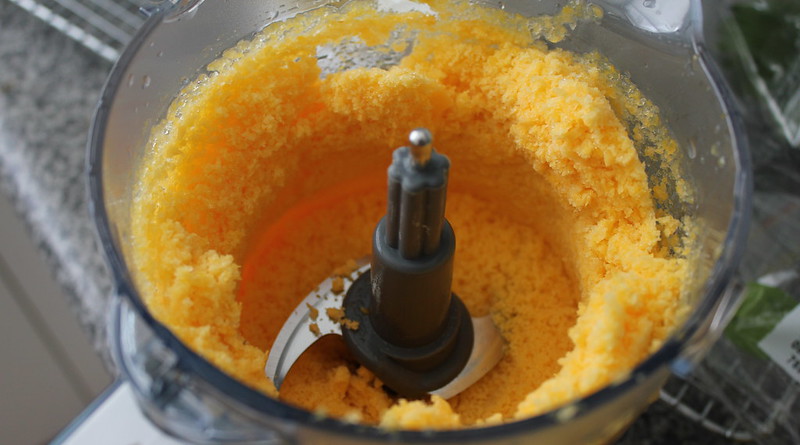 Blend. (Pictured without sugar). Mangoes become crumbled and require some liquid to help it become creamy and smooth. 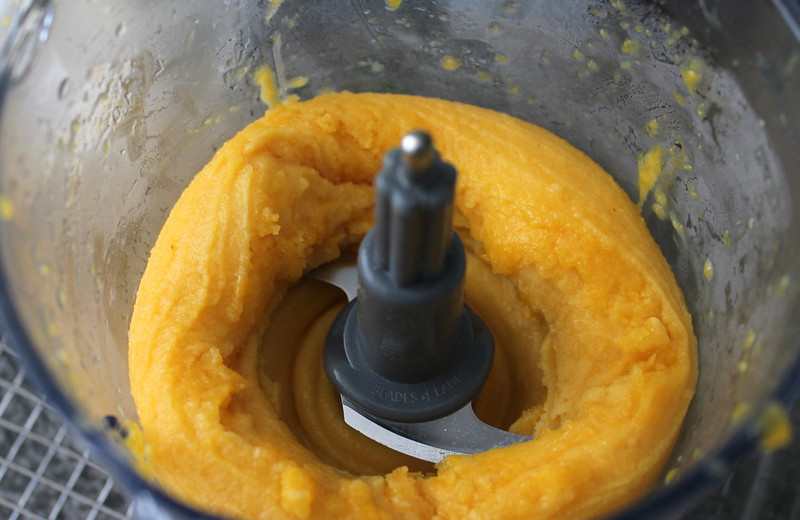 Add milk of choice and blend again – it should become nice and creamy! 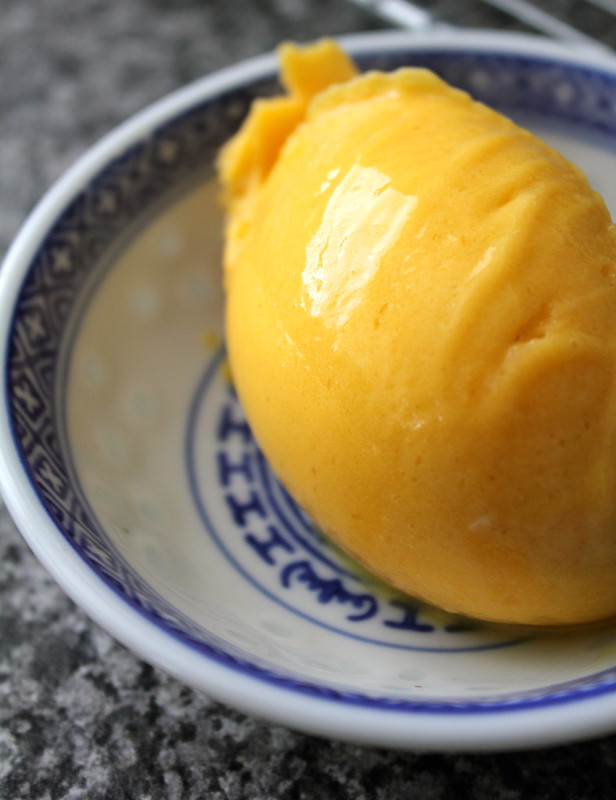 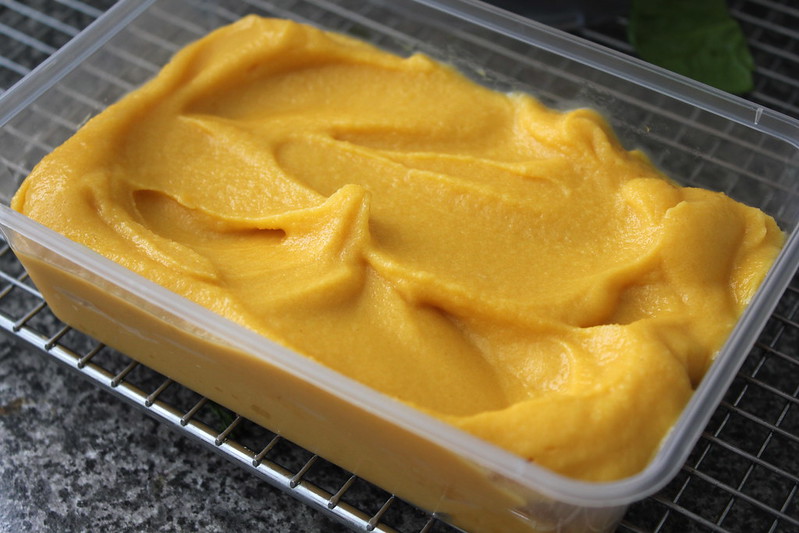 You can also freeze any leftovers in a plastic container for later. This shot reminds me of pumpkin puree hehe.

Serves: About 3 people
Time to prepare: Mangoes need to be frozen overnight but actual blending takes less than a few minutes!

* You can omit if your mangoes are very sweet. These particular mangoes I bought were very cheap and not terribly sweet – clearly they had been forced to ripen early in order to meet demand and unfortunately did not have the best flavour. However, in my experience, proper ripe mangoes are usually more than sweet enough without the sugar added. See for yourself – you can always add extra sugar after tasting if you like (I made two batches, one with and without sugar).

Note: This recipe requires a little preparation overnight – to freeze the mangoes.

Feel free to play around with the measurements in this recipe. You can add more / less mango and just add the milk / sweetener afterwards so you can get a good consistency / sweetness.

I love a good show and the Cake Bake & Sweets is one of my favourites to attend. This weekend is their third year running at good ole Sydney Olympic Park and I’ve managed to attend every year so far & I have never been disappointed. I’m a huge baked goods and sweets fan…

An Easter themed giveaway – enter now to win a $50 prize pack by leaving a comment in this blog post! Australian entrants only, competition closes on March 18.

Everyone loves Char Siu – or Chinese BBQ pork as it’s probably more well known around Australia. Seen hanging from hooks in Chinese takeaway shops glass displays, dripping with sweet, sticky maltose, char siu truly is an iconic Cantonese dish. Char siu is so beloved, it’s easy to see how Char Siu Bao (fluffy white steamed Chinese barbecue pork buns) is one of the most popular items to be ordered at yum cha around the world today.

Simply empty 1 x 395 gram can of (full fat) condensed milk into a large bowl and sift over 2.5-3 cups of milk powder (until you reach a nice dough consistency). If you add too much milk powder by accident, add water 1 tsp at a time until you get back to the consistency that you want. You’re looking for a play-dough type feel. Roll into balls and dip into white sugar and you’re done! If you want to get even more fancy, add a few drops of flavouring/colouring to the condensed milk prior to adding the powder and mix thoroughly to combine.

I have a friend who absolutely loves online voucher deals. Fortunately for me, she is also a food lover & will often find interesting food experiences online for us to go to at a discount. This time, she found a cheese-making class for us to do at Cromer Community Centre for a mere $20 each with Om Nom Cheese. Even though I’m nearing the halfway mark through my time at culinary school, we haven’t touched on the subject of home-made cheeses so I was excited to finally dip my toe (not literally of course!) into unexplored food territory. While I’ve read a few blogs on making cheese at home, like making home-made butter, it’s been one of those things I’ve always meant to make but have never gotten around to it. Mentally it got stuck in the ‘too hard’ basket… until now!

Flavours of the Philippines 2015

Every year I look forward to the (Sydney) Shangri La’s Flavours of the Philippines buffet for Good Food Month. I go every year regularly (read my 2013 post by clicking here), and most years I take several trips! Its only around for 1-2 weeks at a time (only one week this time around sadly) so it’s worth getting in a few times if you love Filipino food as much as I do. The best thing about the SGL Filipino buffet is that if you’ve never tried Filipino food before, it’s the perfect place to start since it has so many specialties you get the opportunity to sample many different dishes at one go.

You’ve been in the music industry for almost 20 years now and yet you’re still so young. What inspired you to start your journey with music? Do you have any particular moments of inspiration throughout your career that you would like to share?

I admired my parents’ record collection from a very young age, and I guess I wanted to be in it! Also as my older brother was quite talented at playing violin and guitar I wanted to copy him… I mean join in! I think I really got my ambition on after primary school when we started playing together as a duo at fetes and local things. The positive reaction gave me the hunger to chase that dream of getting in the record collection.

Christmas giveaway: Your chance to win 1 of 3 gift hampers!

Unfortunately this giveaway has now ended. Congratulations to the winners, Amy, Paula and Luke!